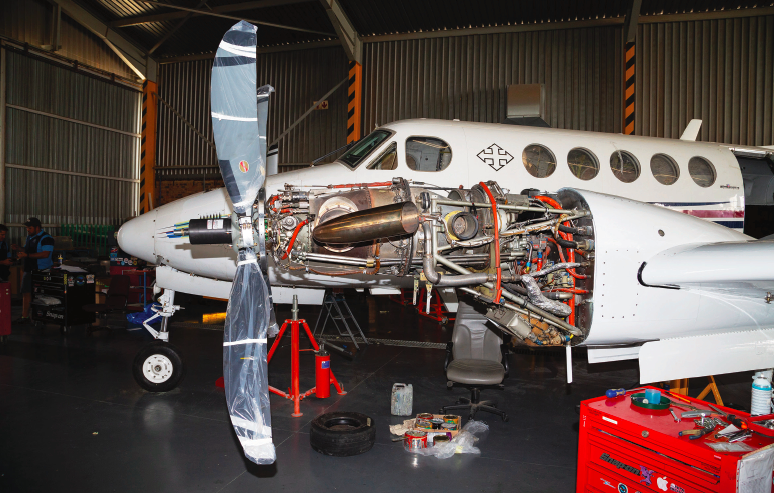 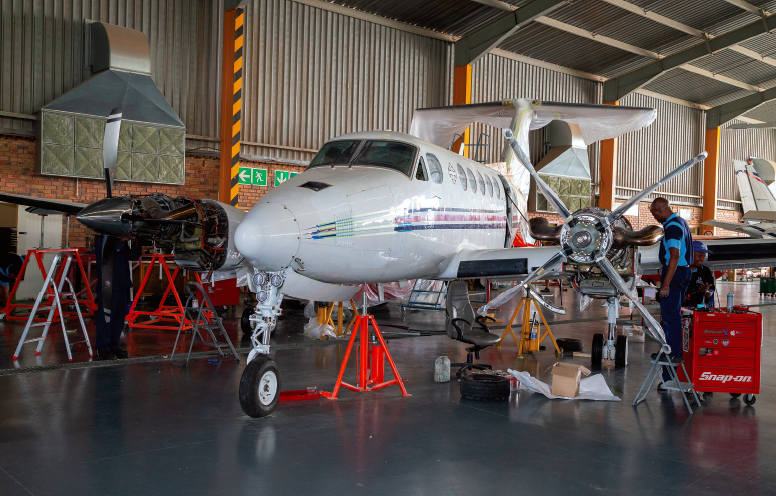 Lanseria-based GemAir and Absolute Aviation Group have partnered to install the first sweptblade turbofan propeller in Africa, on one of their clients’ King Air B200 aircraft          – Mark Mansfield

The new Raisbeck/Hartzell Swept-Blade Turbofan Propeller (SBTP) is regarded as a game changer for the King Air B200 range. The benefit of propeller blade sweep for the King Air is that it allows a larger diameter propeller without increasing noise levels in the aircraft, on the ground or in the air and provides more thrust in both takeoff and climb.

But why sweep the propeller blades?  The newer King Air 200s cruise at 0.52 Mach (MMO) at 28,000 feet, and at a propeller RPM of 1800, the propeller tip Mach number is more than 0.9 – fully into transonic range. This same high-Mach phenomenon also occurs during takeoff at low forward airspeeds but higher prop RPM. For example, at 120 Knots during initial climb at 2000 RPM, the propeller tip Mach is an astonishingly high 0.8. These takeoff, climb and cruise conditions which push the propeller blades significantly into the transonic drag region for aerofoils and unswept wings, happen on almost every King Air 200 flight.

As a comparative example, commercial airliners and business jets typically fly around Mach 0.79 to 0.82, and some even push 0.90 (B747) and the Gulfstream 650 and Cessna Citation X can approach 0.92. The wing sweep on these aircraft varies from 30 to 40 degrees, obvious if you look at them in plan view. Typical commercial aircraft quarter-chord sweep angles are the Douglas DC-8 at 32 degrees and the Boeing 757 with 25 degrees. Boeing’s biggest sweep ever in a commercial plane is the 747 with 37.5 degrees of quarter cord sweep and it cruises beyond Mach 0.9 when pushed.

A jet aircraft’s entire wing flies at a constant Mach number; however, a propeller blade’s Mach number increases the farther out on its diameter. Increasing the propeller diameter increases its tip Mach number, which in turn adds unwanted additional transonic drag and noise which detracts from the performance increases resulting from the increase in diameter. The airflow over an aerofoil is unaffected by whether the aerofoil is a wing moving straight through the air, or a propeller blade whirling around its hub. The air reacts in the same way to an increasing Mach number.

Merely adding propeller diameter doesn’t necessarily add proportional performance improvement and it can be measurably noisier because of transonic effects near the blades’ tips. Introducing blade sweep to the blades largely overcomes these drawbacks. The noise never goes away, but blade sweep allows for an increase in diameter – and hence performance – without the usually attendant penalties.

The swept wing has been around since Willy Messerschmitt put it on the ME 163 back in 1943. George Schiarer from Boeing used the data captured after the War and applied it in 1947 to the B-47 swept-wing bomber. So why hasn’t anybody designed swept-blade propellers? In fact, there have been successful designs of swept-blade propellers. For example, the Airbus A400M has swept wings and swept propellers. It’s designed to fly at Mach 0.72 but its propellers have eight blades and are too expensive for application in general aviation. There are further examples, like the C130-J, but all are generally on very expensive military aircraft; and as such, they don’t qualify for applications like the King Air.

It’s not intuitively obvious that it makes sense to sweep the blades of a propeller which is installed on an aircraft without swept wings and which flies at cruise speeds well below the transonic drag range. And since no one has gone there in propeller design for aircraft like the Beechcraft King Air, no market has ever been developed – and a market is what drives research.

The team of Hartzell Propeller and Raisbeck Engineering have combined their energies for the last three decades on projects to push back the dual boundaries of technology and market. The most recent project resulted in the Raisbeck SBTP.

This new technology is now available in Africa, and Raisbeck Engineering products are officially distributed in Africa by the Absolute Aviation Group, who are also the official agents for Beechcraft and Cessna. The installation was completed by GemAir, which is a SACAA approved Aviation Maintenance Organisation with many years’ experience. Once the client had approved the upgrade, the installation was completed only two days after the kit arrived in the country.