King Air 350 – an investment worth upgrading 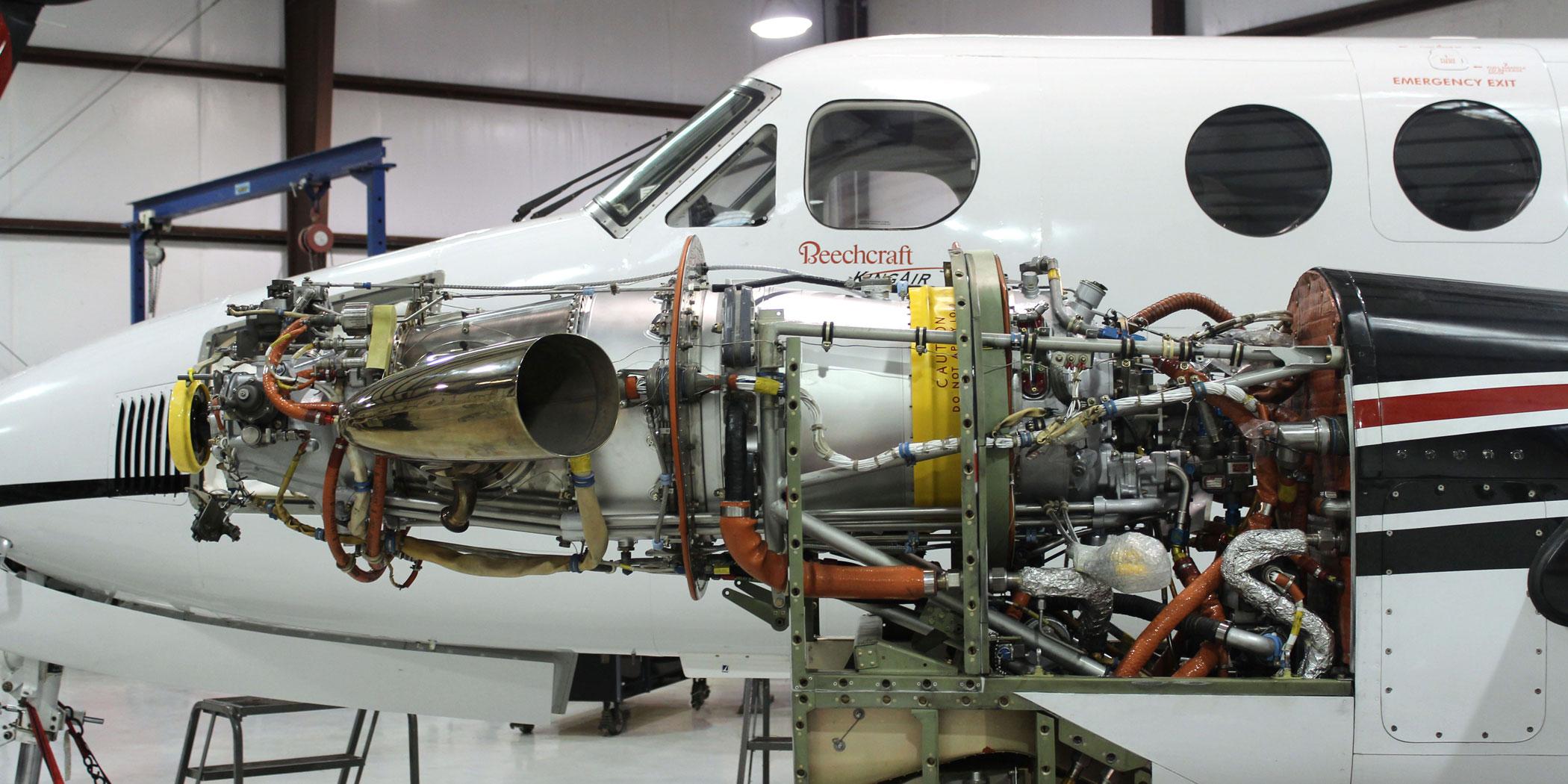 Most airplanes eventually reach the stage when upgrading them no longer makes sense. The basic designs get too dated in the wake of more technologically advanced and economical replacement models. You’d be better off with Puerto Rican bonds than with blowing another dime on any sort of improvement on many aircraft. This is not the case, however, with Beechcraft King Air turboprops, a fact that prompted Texas-based Blackhawk Modifications to launch the XP67A upgrade package for the King Air 350.

You can trace the King Air’s roots back to the 1930s, when Walter Beech introduced the Model 18, arguably the first cabin-class twin-engine business airplane. In 1958, Beech debuted the Queen Air, an aircraft that remarkably resembles today’s King Air, save for the square passenger windows and piston engines. Beech delivered the first King Air in 1964 and by the late 1960s, the company commanded 77 percent of the business twin-turboprop market. Beech’s efforts gave rise to an entire family of larger, more powerful business and commuter turboprops. Today, more than 7,000 King Airs are on the civil registry and more than 1,000 of those are big ones—the 15,000-pound Model 350 that debuted in 1990.

All King Airs are built like trucks, but among this durable lineage, the Model 350 stands out. The wing is certified for infinite life. The 350 was built to commuter-category standards, which provide for added levels of safety and redundancy on critical systems, including the electrical. If one of the two engines fails, its propeller automatically “feathers” to cut drag and the rudder is simultaneously boosted to compensate for the asymmetric thrust. The 58-foot-long wing handles turbulence and ice like a champ. 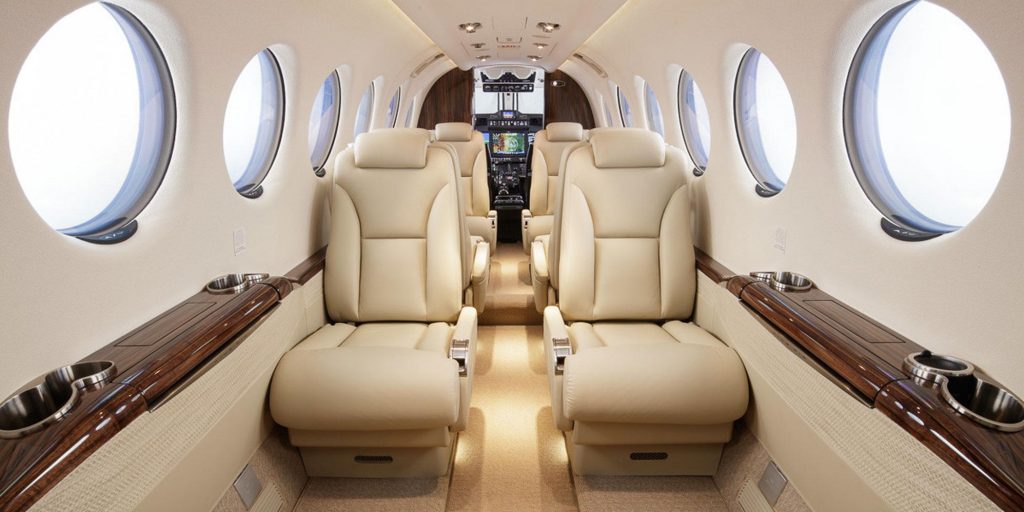 You can load up all eight passenger seats (typical cabin configuration) and full fuel and take off under most circumstances and land the aircraft at its maximum takeoff weight, a testament to the 350’s robust landing gear. At normal temperatures and field elevations, you can operate safely from runways shorter than 4,000 feet, fully loaded. The range is excellent—1,806 nautical miles—and a stock 350 is no slouch in the speed department, either: it can cruise at 312 knots in the mid-20s and can fly as high as 35,000 feet. It handles so well that an autopilot failure is a non-event, and even relatively low-time pilots do not seem to have difficulty transitioning from piston aircraft into a King Air. For missions up to 600 miles, the 350 gets you there within a couple of minutes of a jet for a whole lot less money. At 300 knots in the high-20s, it burns around 95 gallons of fuel per hour; reduce speed into the mid-200s and the burn rate drops to less than 60 gallons per hour.

As nice as all these features are, what continues to sell the 350 is its capacious cabin, which provides more shoulder room than the typical light jet, thanks to its “squared oval” design. The nearly 20-foot-long cabin is four and a half feet wide and nearly five feet tall—not exactly stand-up, but not Munchkinland, either. Fourteen large oval windows flood the cabin with natural light, and the ones on newer models are electrically dimmable. The propellers are farther forward and the engines are farther outboard than on smaller King Airs. That, combined with a tuning-fork anti-noise system, reduces the engine and propeller noise and vibration that make it into the cabin. You’re not going to confuse flying in a 350 with flying in a jet, but it’s not shake, rattle, and roll.

A typical cabin layout features eight slide/swivel and recline executive seats arranged in a pair of club-four arrangements with worktables that deploy from the sidewalls. The sidewalls also host the passenger service units, cup holders, and power plugs. You can choose a six-seat configuration that features two forward-facing executive seats with footrests followed by a club-four. Aircraft entry is via an aft stair door. The aft cabin contains a lavatory with a solid fold-out privacy divider and a netted baggage hold with around 55 cubic feet of space. You can carry additional luggage externally, in lockers behind the engines. Altogether the 350 offers 1,150 pounds and 71 cubic feet of baggage capacity. The lav seat is certified for takeoff and landing and you can install two more seats in the luggage area, bringing total passenger capacity up to 11. The 350 provides all the connectivity of a jet, with available Wi-Fi, Iridium satphone, and the Rockwell Collins Venue in-flight entertainment system. 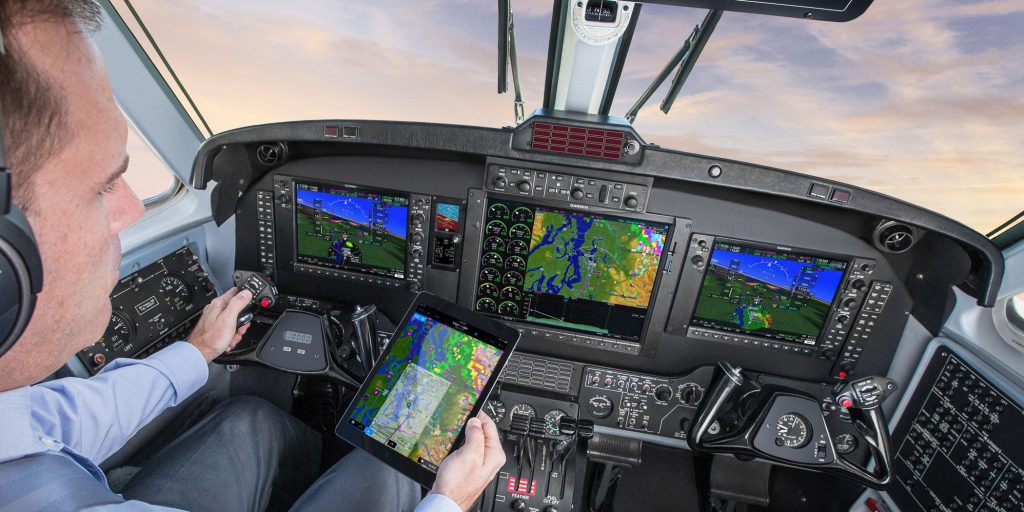 No wonder then that the King Air 350 continues to be the line’s bestseller in recent years, with 63 delivered in 2016 alone. Membership service Wheels Up has made it the backbone of its fleet, ordering 105 in 2013 and operating 78. Wheels Up CEO Kenny Dichter recently said that he sees the potential for as many as 1,000 of the aircraft in the company’s fleet for North America and Western Europe.

A new 350 well-equipped sells for north of $7.5 million and you can buy good used ones for about $1.2 million to $3 million (see chart). But what if you could get a 350 that performed better than new for less than the cost of a new one? Blackhawk Modifications’ re-engine program purports to make that possible, and for 350s at or near engine-overhaul intervals, the proposition has appeal. Engine and propeller overhauls for 350s can run around $400,000 per side. The stock Pratt & Whitney Canada PT-60A engines have a recommended time between overhaul of 3,600 hours. For $1.695 million (list price), Blackhawk’s XP67A program provides a pair of more fuel-efficient and powerful, factory-new Pratt Dash 67 engines (1,200 shaft horsepower each); a pair of new five-blade composite MT propellers and spinners; all the software updates required to make the new engine/prop pairing compatible with either the stock Pro Line 21 avionics or an upgraded Garmin G1000 full glass-panel system; and required training.

The performance improvements are fairly dramatic: a 25 to 30 percent power increase, up to a 40 knot boost in maximum cruise speed into the range of light jets, and a more than 50 percent reduction in climb time to cruise ceiling altitude. The shorter time to altitude, the less fuel you burn overall. The performance improvement is even greater in high/hot environments. (Think Aspen, Colorado in July.) Upgrading the stock Pro Line 21 avionics with the most current capabilities runs in the neighborhood of $200,000 to $250,000; advancing to the Garmin G1000Nxi system with all the latest and greatest features will cost about $350,000 to $400,000.

Sinking that kind of money into an older airplane is not for everyone, but Blackhawk’s research, combined with the pricing history of other King Air modification programs, indicates that owners will recapture their investment in lower operating costs and higher residual values. In the case of the King Air 350, making a good airplane better makes sense.

find out more about the King Air 350i